An official document revealed hundreds of billions of riyals that have been withdrawn from Central Bank of Yemen as additional expenditures during the last three months (first quarter) this year.

The letter by Noman Al-Suhaibi, Minister of Finance confirmed that the amount of 135 billion riyals have been withdrawn on the overdraft from the Central Bank of Yemen.

The value of the government indebtedness of the Central Bank reached 609 billion riyals.

The letter was addressed from Minister of Finance, Noman Al-Suhaibi to the Prime Minister, Ali Mujawar reveals the extent of tampering with the public money during the last period of time and the seriousness of the economical situation is because of these irresponsible practices. Al-Suhaibi assured in his letter that the shortage that is happening now cannot be dealt with or accepted; what is happening is a financial burden complicates the situation to its complexity. 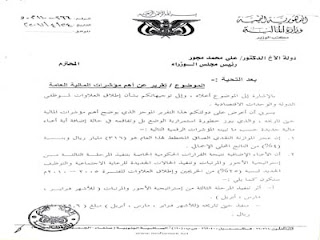 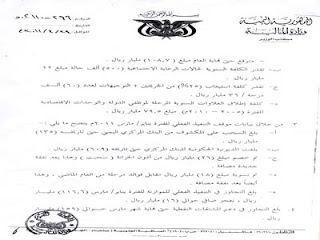 After greetings:
Subject: Report on the most important indicators of public finance

I am pleased to introduce to you this summarized report that shows the most important financial indicators up to date which highlights the seriousness of the continuity of the situation but exacerbated in case of any additional financial burdens as indicated by the following numerical indicators:

1. The net cash budget deficit planned for this year is 316 billion riyals and by 4% of the gross domestic product.

D. The cost of the annual bonuses for the state employers and ecnomical units for the period of 2005-2010 amount of 79.5 billion riyals.

3. Through the effective implementation of positions for  th period of January/March 2011, refelect the following:

A. Overdraft from Central Bank of Yemen to date reached 135 billion riyals.

C. Amount of 26 billion riyals was taken out of the treasury bills (withdrawn); this is the expense of new additives.

D. Amount of 18 billion riyals was settled in return to the benefits of a stage from last year, and this as well counts as an added expense.

4. Oil derivatives support until the end of March reached about 159 billion riyals.

From the above you can see that the deficit could reach 1,184,436 million riyals during the current year, at a rate of 14.1% from the gross domestic product as described in the attached table.

It is a deficit that can not be dealt with nor accepted.

The average monthly sales of the government from crude oil about 3 million barrels and on an average price of $100 per barrel in a cost of $300 millions which is 64 billion riyals. While the monthly average support of petroleum products reached 68 billion riyals, which means that the government needs to support all of the oil derivatives with the full amount of crude oil produced from the gas sector. In addition to four billions from the Central Bank of deficit. Whereas the income (non-oil) does not cover the salaries and wages in the current situation, how would it be in the case of bounces under these conditions?

In terms of our commitment to reduce the seriousness of the growing budget deficit to the extend that it can not be said to their sustainability, it is necessary to put you in the picture to be aware of the matter and we are confident of your desired care on the city to maintain the sustainability of public finances and not be allowed to add any new financial burdens that could add complications to its complexity.